The Fortune of the Rougons 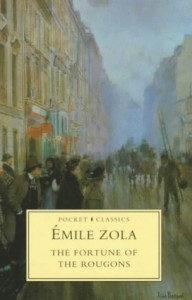 This is the first in the Rougon-Macquart series of twenty novels written by Zola. In no way do you have to read this book first. All the books in the series stand on their own. I read this book twelfth and that was a fortuitous way of approaching it because at that point I was interested in the family and how it originated.

A lot of this book is about setting up the history of the family. Zola always claimed to be a naturalistic writer and the series as a whole is meant to trace the hereditary weakness of the family as it is expressed in different ways. In this book we see the origins of that weakness, which are told in elaborate flashbacks. The main action takes place over a week starting with the coup that ushered in the Second Empire in which all the novels are set.

The corruption of the family was always meant to mirror the corruption of the Empire and in particular this book is concerned with how the Rougon branch makes its fortune through playing a very cynical role during the coup. Like so much of Zola's work, the evil prosper, while crushing naive goodness beneath its feet.

The book admirably does its job of setting up the series to come,, but also telling a story in its own right. However, I think that it works best read out of order after all these minor characters have started to mean something in the context of his other works.

All of Zola's main tropes are on view here. The politics, riot scenes, elaborate and effective descriptions of place. It all works very effectively as the progenitor story, but it should be read after at least half a dozen others in the series.

So do not read this book unless you are already a Zola fan. Read Germinal or L'Assomoire instead. If you are a Zola fan, get ready for archetypal Zola and seeing how the whole thing started. A trues forerunner of the series.
Tweet