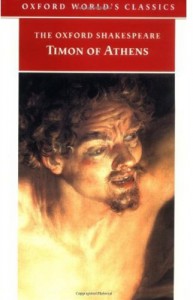 Timon of Athens is amongst the most obscure of Shakespeare's play and apparently most modern academics think that it was a collaboration with Thomas Middleton.  It is without any doubt the weakest play by Shakespeare that I have personally read.  The plot is very simplistic.  Essentially, Timon tries to win friends through gifts and  parties, and in doing so bankrupts himself.  He asks his friends for money and they prove false, so he becomes a misanthrope and ends up living in the wilderness, where he becomes more and more embittered.  There is also a subplot involving Alcibiades which has little to do with history but does trade upon Alcibiades reputation.

The plot is the most simplistic of any Shakespeare play that I have read.  It also lacks much of the heights of language.  I did not have a copy that was annotated enough to find it interesting as a collaboration and just guessed that the worst bits were probably by Middleton.

However, what I did find interesting was the ways in which it prefigures Lear.  Like Lear the characters are not defined by psychological realism but are archetypes.  Also like Lear, it is a play where no one really benefits, although it is less extreme.  The protagonist divorced of his possessions goes mad in the wilderness and there is even a fool about.  The fact that it plays with many of the same themes as Lear is interesting and certainly does make you believe that Shakespeare was very much against giving things to people you care about.

Timon for me is most interesting in seeing Lear type subjects done in embryo and not all that well.  Timon is clearly an experiment and for the most part it is a failed one.  It led to King Lear which is Shakespeare's most experimental play in what was a highly experimental career and Timon is most interesting for that.  Having pointed out that the play is both a collaboration and a failed experiment and so far for me the worst Shakespeare play that I have read, I should also point out that it is objectively still pretty good.  It is far below Shakespeare's normal standard, but that still leaves it much better than most writers could ever achieve.