Charlotte Perkins Gilman's The Yellow Wallpaper and Other Stories 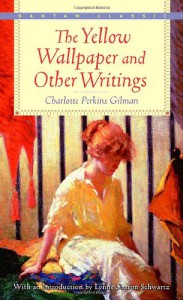 The problem with this book is not so much The Yellow Wallpaper part, but the Other Stories part.  The Yellow Wallpaper is an effective short story, about a woman who starts going crazy, because she has been locked up in a room as part of a rest cure for what would then have been called neurosis.  Its based on real events from the author's life.  It is oddly reminiscent of Hodgson and Lovecraft and is an effective piece full of anger and rage, although not really a brilliant piece.  Her other works are sometimes stories with twist endings or often angry pieces with a feminist message.  I did not like them.  It's been hard to put my finger on why.  They are bludgeoning in their message, but I like writers like Orwell, Selby and Zola, so that is not a problem for me.  I think part of it is that they lack nuance.  Otherwise, I haven't really been able to put my finger on what makes them, in my opinion, actively bad.  I think that they are just not that good quite frankly.  It is all a bit disappointing.  After, being let down about 10 times in a row, I eventually gave up.