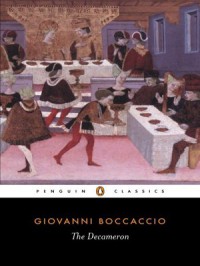 A good book and worth reading. It is a collection of a hundred short stories with a frame tale. This book is sometimes seen either as a response or a complement to the Divine Comedy. While it is very aware of Dante, I don't think that it is that at all. It prefigures in a lot of ways the renaissance and is very much focused on the human condition. It is remarkably smutty and I don't think that there is a coherent philosophy here, but there is a consistent attitude. People who try to read it as a christian work are I think mistaken. It is about as unchristian as it could be under the circumstances and very much celebrates a comical Machiavellian approach to human relations.

Boccaccio's work is filled with a strong anticlericism and often portrays Jews and Muslims favorably. The whole thing has a light playfulness to it with a few exceptions. It is really focused on stories of cuckolding with the husband repeatedly duped and it is firmly on the side of the lovers.

It provides an antidote to the way that we normally think about the middle ages. Instead of nights and chivalry, we get satire and libertine sexuality.

It's all pretty good, albeit a hundred stories is too much, but a barrel of monkeys none-the-less. It is most like the Canterbury tales, except with less poetry and more attitude.