The Poetry of Revictimization 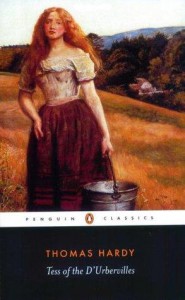 Sometimes a book out of my past comes singing to me, and I know that the time to reread it is now, although I invariably don't know why.  That does not happen very often and I have always known that I will reread Tess.  I first read Tess twenty years ago and it began a love affair for me with the novels of Thomas Hardy.

Tess is a book about a woman who is "seduced" and then revictimized over and over again.  Tess starts as a beautiful and charming but naive girl, who is essentially unprepared by oblivious and self-centered parents for the life that is to befall her.  Tess very much has the personality of those who are target by abusive and predatory personalities.  If anything she is overly concerned for the feelings of others, inclined to minimize or even dismiss her own poor treatment, while overly blaming herself for what happens.  Like Dostoevsky's The Idiot she is a central character who is pure and struggles to understand the victimization that befalls her.

The initial incident comes early and at the end of the first part one of seven, she is "seduced".  This being a Victorian novel the sex must happen between chapter breaks, but Hardy makes it clear that it is no seduction at all.  Her rapist, Alec D'Urberville, has been repeatedly rebuffed, and finally begins the act when she is sleeping.  Tess blames herself for a moment of weakness, but this is a part of her self-deception.  Hardy does not have the conceptual tools developed in the 20th century for acquaintance rape, but clearly Tess blames herself for her violation, in addition to blaming her violator.  Hardy's subtitle: A Pure Woman.  Shows where he stands.  It is not, as it is sometimes taken to be, an attack on Victorian prudery, but instead an account of how once, someone is a victim of a crime, they can end up being victimized over and over again.

Tess, becomes pregnant with an infant that soon dies.  Her parents, indifferent to her suffering, either minimize or ignore what has happened to her.  Tess soon leaves to become a diary amid.  The pastoral scenes around the dairy are perhaps Hardy's best invocation of landscape and countryside.  They have stayed with me over all these years in sharp detail.  Tess is consumed by a sense of being stained and corrupted and somehow at fault while at the same time has a conflicting feling of being violated.  It is this exploration, which is part of Hardy's genius.  The imposition of Alec D'Urberville's view and the corresponding reinforcement of it by society, is at war with her instinctive sense of morality.  It is at this point that the book becomes deeply and movingly about revictimization, how it works and what its consequences are.

I always think of 1984 and Lolita as the two great books on oppression.  While each deals with a specific kind of oppression, they both depict starkly the actual realities of any kind of oppression that they can stand in for anything.  I once read that the best book for understanding abusive relationships was 1984 and I believe that to be true.  As those books are to oppression, Tess is to revictimization.  The details and specifics might vary, the nature of the victimization and the nature of the revictimization vary, but the essential nature of it is as clearly exposed in Tess as in any other book.

What makes the book so disturbing is the nature of this revictimization.  It is not just society in general that revictimizes Tess, it is in particular those that she most loves and cares about.  Most obviously her husband a man who she idealizes Angel Clare.  Angel Clare has many of the features that Hardy theoretically admires in a man.  However, he can not find in himself a way to "forgive" Tess.  This is despite the fact that he has engaged in a sordid weekend of sex, which he of course wholly chooses.  He instead abandons Tess to a life of poverty and want.

Tess then once again encounters Alec D'Urberville who is acting as a lay preacher.  Alec immediately throws this over in a campaign to harass and control Tess.  In doing so he blames Tess for his fall from religion and we see that even religion is responsible for Tess' revictimization.  Finally, Tess gives in to him not for herself, but as a way of saving her now destitute family.

Throughout the whole thing Tess is passive.  This has brought the novel in for some criticism, but a novel about re-victimization must be about a passive main character by its nature.  The novel divides the world into predators and prey with the bulk of humanity the idle spectators that betray their roles as protectors or even as decent bystanders and actively or passively produce a situation in which Tess cannot be anything other than a good person and a victim.  It is only in her last desperate act, an act done out of faith for a husband that has spent the marriage betraying her that Tess becomes in any way an active character.

What makes the novel so disturbing and difficult to read (I could only read it in little fragments) is this systematic betrayal, by all that should protect Tess.  Tess places the blame for re-victimization on the protectors and it is this which is both the great insight and the most disturbing feature of the novel.

Hardy's prose is at his most beautiful of all the novels.  Hardy is very much a writer, who flouts what is considered good writing at the time he was writing and what is considered good writing today.  He injects himself into the narrative making philosophical comments and comments on the characters.  He will also veer wildly between styles, at one moment writing poetically about landscape and the next reproducing the country slang of milkmaids.  That is not meant to be good writing, but I think the writing is Hardy at his most beautiful and poetic.

Beyond all that is the figure of Tess.  We see little of her interior life, and the figure of a milkmaid whose virtue is stolen does not appear to be a promising one, but she is one of the great characters in literature and there is something about her characterization, which makes her the very epitome of noble suffering.  The book is not a tragedy in the normal sense.  It is not really Tess' character flaws that bring her down, although she does have the character of a victim.  Instead, it is the very flaws in the nature of humanity and in those she trusts and believe in that doom her.  In that sense it has more in common with works, like Lolita, The Idiot and 1984, than with Greek tragedy.

In my opinion one of the ten or twenty greatest works of fiction ever written.